Solid-state batteries are considered as a next-generation battery technology with many potential improvements over the current state-of-the-art Li-ion in terms of safety, power and energy density. Enabling this technology relies on the discovery and application of solid electrolytes that replace the currently used liquid solutions.

In classical Li-ion batteries the electrolytes are in liquid phase and consists of a lithium salt, such as LiPF6, LiBF4, or LiClO4, dissolved in an organic solvent, such as ethylene carbonate, dimethyl carbonate or diethyl carbonate. Typical ionic conductivities of liquid electrolyte at room temperature (20 °C) are in the range of 10-2 – 10 S · cm-1. Liquid electrolyte batteries typically possess bulky electrodes which are a mixture ofelectrode material, conductive additives (e.g. carbon black) and a binder. The liquid electrolyte penetrates the porous network, facilitating the Li+ transport. A separator is adopted between the anode and cathode and soaked in the liquid electrolyte. The main function of a separator is to keep the two electrodes apart to prevent electrical short circuits while also allowing the transport of lithium ions. The biggest drawback of the use of these types of electrolytes is the presence of the flammable organic solvent, which poses a significant safety risk due to the possibility of leaks. In addition, batteries with liquid electrolytes can suffer of limited power output because of the long distance that Li-ions need to diffuse through. Another issue when using liquid electrolytes is their instability in contact with the electrodes. High cathode potentials or low anode potentials typically give rise to an electrode-electrolyte interphase (EEI) when using a liquid electrolyte. The EEI might stabilize the contact between the electrode and the liquid electrolyte as it prevents further contact between the two compounds. A typical example is seen in graphite, which can only be used due to the formation of a stable EEI. However, an EEI typically adds a significant impedance component to the system, reducing the power output of the device. At present no good electrolytes are found that are stable or form a stabilizing EEI in contact with high voltage electrode materials. 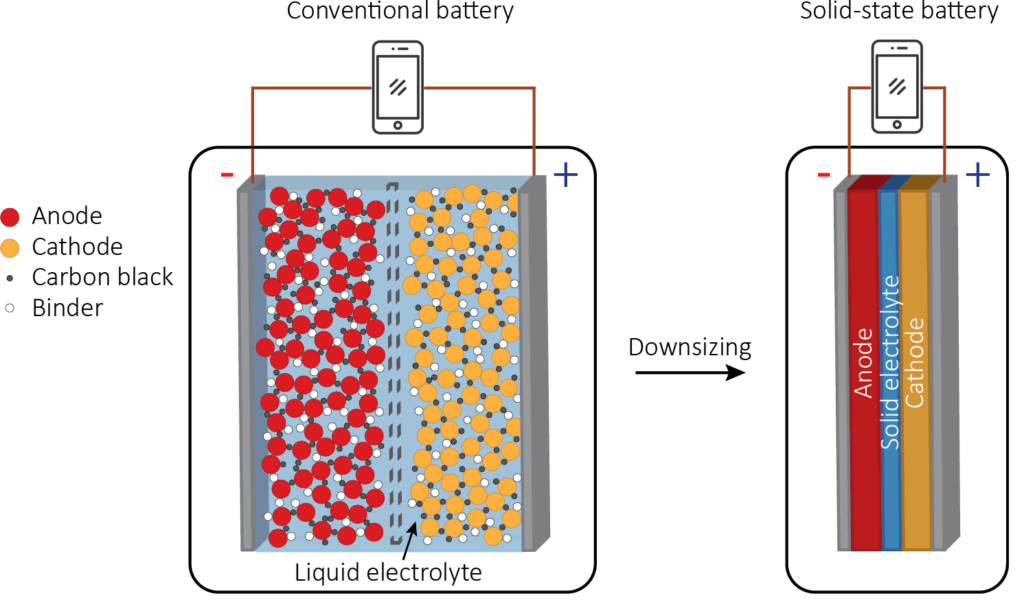 Solid-state electrolytes are classified as organic and inorganic solid electrolytes. Organic electrolytes are feasible for flexible battery designs owing to their soft intrinsic features. However, these materials face other issues, such as low Li+ conductivity (< 10-5 S · cm-1 at room temperature), large ionic transfer resistance, and oxidation at high voltages. Inorganic solid electrolytes consists of an inorganic material in the crystalline or glassy state, which conducts ion by diffusion through the lattice. Inorganic solid-state electrolytes can be oxide-, sulfide- or phosphate-based. Yet, the highest Li-ion conductivity in a solid material was reported to be ~ 10-2 S · cm-1 in the sulfide-based, superionic conductor Li10GeP2S12. Although this structure has excellent lithium conductivity, it proves highly reactive. The limited stability of this material prevents its practical use.

One frequent problem with high ionic conductive electrolytes is the limited stability window. Another interesting electrolyte is the nitrogen doped lithium phosphate glass (LixPOyNz). Although LiPON does not have an extremely high lithium conductivity (~ 10-6 S · cm-1), it shows a remarkably wide electrochemical stability window ranging from 0 up to 5.5 V vs Li+/Li. Furthermore, it has a low electronic conductivity (~ 10-14 S · cm-1) and thus allows batteries with very low self-discharge rates. A way to compensate for the lower ionic conductivity of solid electrolytes is by further downscaling the thickness of the solid electrolyte layers. A 100 nm thick electrolyte layer with conductivity of 10-6 S · cm-1 will have the same ionic resistance as a 10 um electrolyte with conductivity of 10-4 S · cm-1. Therefore, their thickness is typically limited to a few tens of nm to guarantee sufficient Li-ion transport. Currently, solid state batteries have found use in pacemakers, radio-frequency identification (RFID) and wearable devices. Increase in utilization of solid-state batteries in healthcare, wearable and drone applications boosts the growth of solid-state batteries.